This infographic report summarizes the results of over 8,000 direct responses from graduates of the Fall / Winter class of 2015 who participated in The Outcomes Survey to report their post-graduation activities. As of 6 months post-graduation, 54% of those respondents who received baccalaureate degrees reported having attained full-time employment as their primary occupational status. An additional 13.6% of baccalaureate respondents reported having attained part-time employment, and another 7.3% had gained admission into an educational program. Taken together, these positive outcomes account for 74.9% of what baccalaureate respondents reported as their primary occupation as of 6 months post-graduation. This indicates a high rate of positive outcomes for the Fall / Winter 2015 class; especially considering that only 15.5% of respondents indicated they were unemployed and seeking employment.

These figures are even higher when considering all post-graduation activities reported by graduates in addition to their primary occupation. Taking these other activities into consideration, 55.8% of baccalaureate respondents reported working full-time, 21.8% reported working part-time, and 10.5% had enrolled into additional education. The percentage boosts shown in these categories demonstrate the importance of tracking all of the various activities students are doing after graduation—they are not simply doing one thing. Graduates who indicated they were employed were asked to report their annual income. Among the employed baccalaureate respondents who reported income, the median income was $35,000. Of those bachelor level graduates that reported the positive outcomes above, 78% reported an occupation related to their academic major, 79% reported and occupation related to their career goals, and 74% reported satisfaction with their occupation.

In order to obtain these occupations, baccalaureate graduates reported when they began their search and where all they looked. The vast majority of graduates, 61.2%, indicated they began their occupation search in the months preceding graduation. Specifically, 10.7% of respondents began looking in the time just before graduation, 12.2% began looking 1-2 months prior to graduation, 17.8% began 3-5 months prior, and 20.5% began at least 6 months before they graduated. By contrast, 13.9% of baccalaureate graduates only began their occupation search in the time after graduation, and a mere 7.1% indicated they had not yet started their search as of 6 months post-graduation. During their occupation search, these baccalaureate graduates tended to look mostly in specific locations rather than in broad areas. 58.4% of respondents indicated they looked near their hometown, 23.6% looked near their alma mater, and 24% otherwise limited their search to specific cities. Fewer graduates utilized more expansive searches. 15.7% of respondents looked state-wide, 15.4% looked country-wide or regionally, and only 4.9% reported looking outside of the United States. 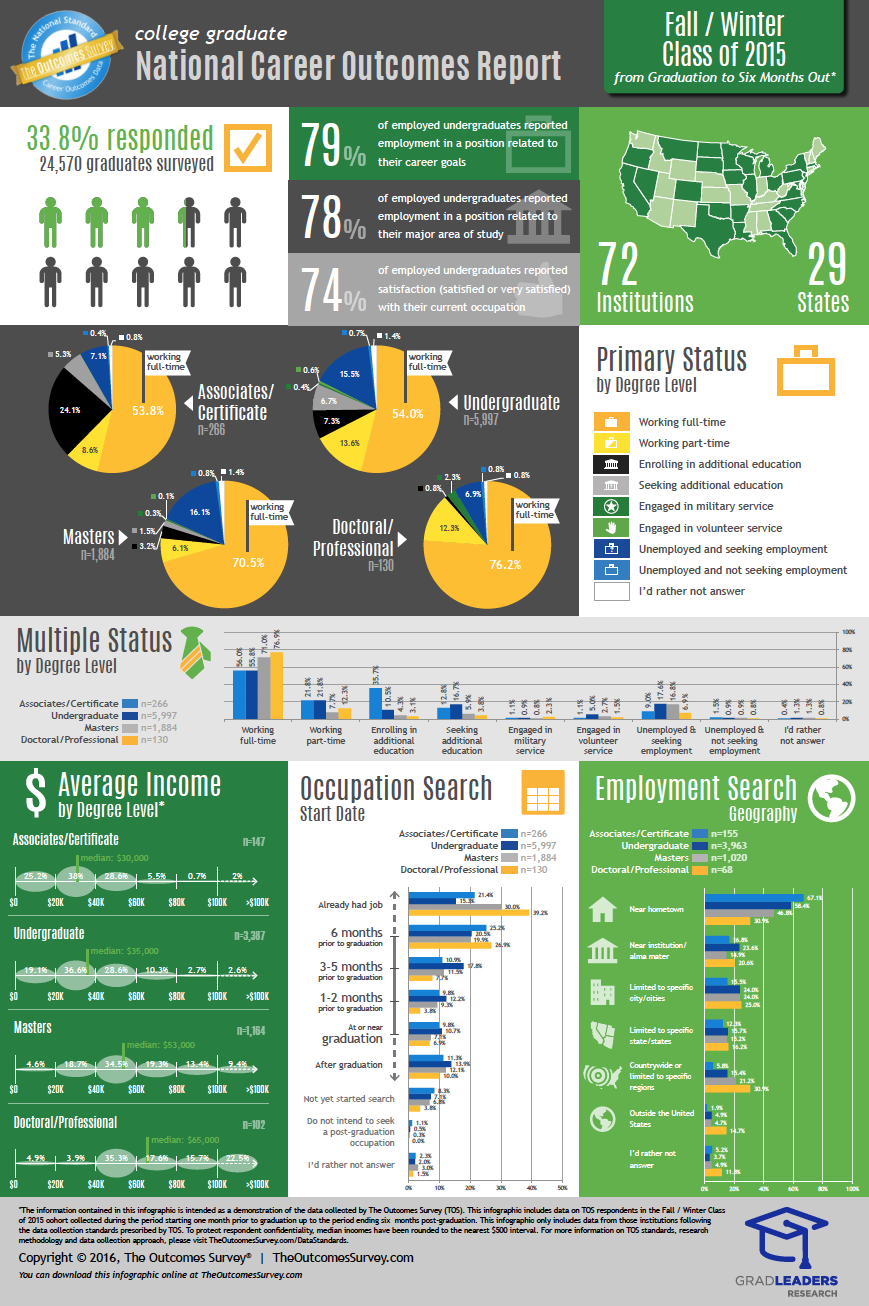