Join us for our 12th annual MBA Connections Conference, where the leading employers of b-school talent and career service professionals from top graduate business schools gather to debate issues, share best practices, and participate in moderated discussions about today’s industry.

As the premier thought leaders for both MBA recruitment and career services, we’re excited to introduce a fellow innovator and the speaker for this year’s MBA Connections Conference. 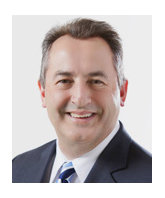 Patrick Losinski has served as Chief Executive Officer of the Columbus Metropolitan Library (CML), since 2002. He oversees twenty-three branches, serving over 5 million customers and 40,000 registered job-seekers who use the library as a resource to look for jobs in the Columbus area. CML is currently in the midst of a $135M capital improvement program to construct 10 new libraries.  As an innovator of one of the top library systems in the country, Patrick is well-recognized for his out-of-the-box ideas, commitment to strategy, and for building a workplace culture with a customer-centric model in a rapidly evolving digital age.

At this year’s MBA Connections conference, Patrick will deliver a keynote entitled "Changing Strategy and Shaping Culture." He'll discuss how today’s urban public libraries are being challenged to rethink their business model – and how the importance of nurturing a healthy culture is key to the success of any enterprise.  His ideas are transferable to the profit, non-profit education and business sectors.

Patrick has a proven record. Over the years, he has helped CML achieve more recognition than anyother urban public library. CML has received the Institute for Museum and Library Services National Medal in 2011, was named Library Journal’s National Library of the Year in 2010, was a Library Journal five-star library for seven consecutive years, and has been named the number one urban library in the United States 3 times.

Prior to joining CML, Patrick spent five years as executive director of Pikes Peak Library District in Colorado Springs and has served as a library director at two other public library systems in Illinois and Ohio. He holds a master’s degree from the University of Wisconsin and served as chair of the Urban Libraries Council headquartered in Washington D.C. He was also co-chair of the World Library Information Congress, held in Columbus in 2016.

He received the 2000 Leadership Awardfrom the Greater Colorado Springs Economic Development Corporation, the 2010 Public Library Association’s “Charlie Robinson Award” for risk-taking and innovation, and the 2012Champion of Children Award from the United Way of Central Ohio. Columbus CEO magazine named him “Superstar” in the General Management category in 2012.

Read more about Patrick Losinski and his mission at Columbus CEO, The Columbus Foundation, or Next Library. You can also attend his highly-anticipated keynote at MBA Connections 2017. Click here to register before it’s too late! https://www.gradleaders.com/mba-connections